A new trend has emerged where cable networks are collaborating with MVPD and vMVPD partners to turn their national ad inventory into something far more appealing to brand advertisers.  Armed with new capabilities, cable networks are already starting to offer brand advertisers the ability to target their television commercial to their ideal audience.  This creates an opportunity for direct response advertisers to have their commercials delivered, during the same ad breaks, to all the leftover households.

Before we get into how these new “advanced advertising” break types work, let’s look at how national cable break types have worked historically.

On the left side of the diagram below, a cable network sends its signal via satellite to two different MVPDs.  If you aren’t familiar with the term, and haven’t clicked one of the links above, MVPD is short for Multiple Video Program Distributor.  MVPD is a catch-all phrase to describe all of the television distribution companies that sell access to network cable programming via cable, satellite, fiber, or via internet (the latter referred to as an vMVPD where “v” is short for “virtual”).   In the past, we’ve only had to understand and deal with two break types.  We had the national ad break, in which commercials were seen by viewers nationwide, and we had the DPI ad break.  Most cable networks cut to a DPI ad break 2 minutes out of every hour.  As shown below, a cable network has sold a commercial to Expedia to run during a DPI ad break.  Buying this type of ad break is how direct response advertisers have purchased leftovers at a discount for many years.

To help explain, DPI ad breaks are preceded by a Digital Program Insertion (DPI) signal. Most MVPDs have ad-insertion equipment that listens for the DPI signal. As soon as the DPI signal is detected, the ad insertion equipment begins inserting commercials sold by the MVPD to local advertisers. In the diagram below, one of the two MVPDs is shown inserting a Flex Tape commercial covering up the Expedia commercial. In most markets, including urban markets, the MVPDs aggressively sell local advertising covering up most, if not all, of the ads like Expedia running on the network at the same time.  However, in smaller rural markets, the MVPD may not sell local advertising as demonstrated by the second MVPD below which doesn’t insert an ad allowing the Expedia ad to be seen by viewers in their market.  These are the leftovers that direct response advertisers expect to receive when buying DPI break inventory from the cable networks today. 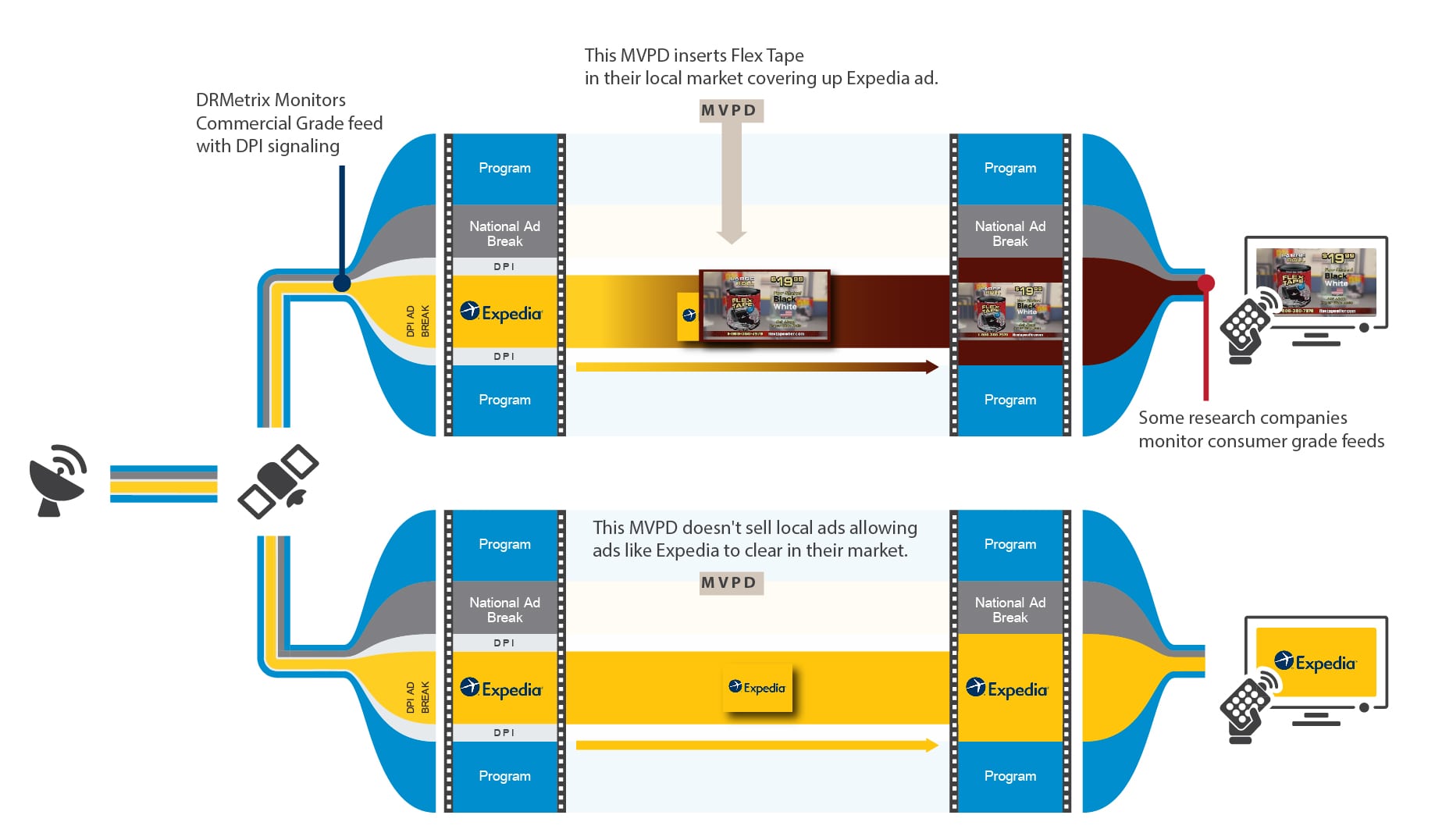 With new advanced television advertising models, the networks use a different type of DPI signal to let certain MVPDs, who have a contract with the network,  know that it’s time for them to deliver the advanced advertising commercial to its intended audience.  At the same time, the network may run a direct response commercial on its network feed to be viewed by any households not otherwise targeted by the advanced advertising campaign.  One of the network groups stated that a smaller universe of MVPDs are currently involved in their advanced advertising programs.  To other MVPDs, this new type of ad break looks just like any other national ad break which they are not allowed to cover up.  Accordingly, the audience composition for this new type of ad break is likely quite different in comparison to the traditional DPI ad break.

DRMetrix is the first television research company to monitor national cable DPI signals in order to recognize and segment between the two traditional ad break types.  Our company is currently collaborating with cable networks in an attempt to detect the alternative DPI signals that are starting to be used in the marketplace to signal these new advanced advertising breaks.  For now, DRMetrix flags all commercials running outside of normal DPI breaks as “national”.

Some networks have taken to inserting direct response ads in DPI breaks and their new advanced advertising breaks billing both as a regular DPI ad break.  Some agencies have started to notice the discrepancy as DRMetrix continues to report the advanced advertising breaks as “national”.  DRMetrix has had to explain to various agencies what is happening and quite often the agencies are unaware of the new break type.  So, we thought this article would help to set the record straight!

Please provide us with your feedback and questions on our blog!  We’d love to hear from you.